A Tribute to Uncle John Lamon 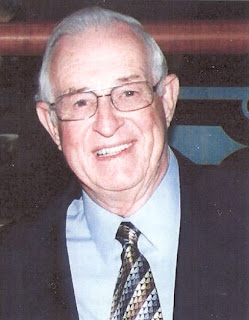 Recently our family lost our patriarch, Uncle John. John was an exceptional man in so many ways, exemplified by his obituary below, written by his son, Steve. When John was in town, he always made it a point to stop by and visit sons and daughters, grandchildren, and nephews and nieces at their respective homes and workplaces. He was friendly to everyone, with a wonderful smile, and always a perfect gentleman! John was truly one-of-a-kind, an incredible role model for us all. His visits will be sorely missed.

Uncle John was the youngest of three brothers, sons of Lonnie and Ossie Lamon who came to this community from Alabama in 1925. Lonnie and his sons founded the family company, Lamon Construction Co., which is still family-owned and operated by Henry's son, Hank.

I was privileged to become a member of this large and loving family when I married Grady's eldest son, David, 35 years ago. From the beginning I was welcomed as if I had been born into the family.

At that time, 1974, Ossie "Gram" Lamon, was the matriarch of the family, and she became my grandmother as well. The loving example provided by Gram and her sons and their wives, Grady and Bette, Henry and Pat, and John and Marlene, has left a life-long impression on me. Service to God and country, founding a company well-respected in the area, devotion to family, friends and the community~ these are values that this family lives by.

Uncle John, we will miss you, never forget you, and love you always. Our loss is Heaven's gain!

John Albert Lamon passed away at the age of 77 from heart failure on March 5, 2009 while on vacation with his wife Marlene in Las Vegas, Nevada. John was born on September 9, 1931 in Marysville, California. He attended Mary Covillaud Elementary School and Marysville High School, where he lettered in basketball and track, served in the ROTC and as Student Body President, and graduated as the class valedictorian in 1949. He also achieved the rank of Life Scout before venturing off to college.

From 1949 through 1953, John attended the University of California, Berkeley and graduated with honors from the school of civil engineering. He rowed on the Cal crew and was active in the men's residence hall known as Bowles Hall. While at Cal, John met and courted Marlene "Mike" Thompson of Salinas, California. John and Mike married in June, 1953. From 1953 through 1956, John served as an officer in the United States Navy, where he saw active duty in the Pacific at the end of the Korean War.

In 1957 John and Marlene moved to Marysville, where he joined his older brothers Grady and Henry in the local family business known as Lamon Construction Company. John and his brothers were active in the local Chamber of Commerce and business community until John retired in 1991. During that time John was a devoted and faithful member of the Marysville Rotary Club (with 35 years of perfect attendance), and was active in several community organizations, including the former Buttes Area Council of the Boy Scouts of America (which awarded him the distinguished "Silver Beaver" award), and on the Fremont-Rideout Hospital Board of Directors.

After retiring in 1991, John and Marlene traveled the world extensively, visiting every continent, and spent their "spare time" with a host of family and friends, often on their beloved island of Maui, Hawaii or on the pristine shores of Lake Tahoe at Incline Village. John was an avid sports fan, and he and Marlene endured 26 straight seasons as Sacramento Kings season ticket holders (all without a championship). He also supported the Cal Bears, the S.F. 49ers, and the S.F. Giants (who sadly failed to win a west coast World Series during his lifetime).

John and Marlene were married for over 55 years and their relationship remains an inspiration to all. They reared 4 children in the Marysville public schools and in the Marysville First Presbyterian Church, and all four thereafter obtained college degrees from California State colleges and universities. John is survived by is loving wife, Marlene; by his thankful children, daughter Karen Bowen (of Natomas); son John W. Lamon and daughter-in-law Lynn Lamon (of Pleasanton); daughter Diane Uutela and son-in-law Jerry Uutela (of Yuba City); and son Steven Lamon and daughter-in-law Colleen Lamon (of Yuba City); and by his grateful grandchildren: Jeremy Payne (and his wife Molly), Michael Payne (and his wife Ashley), Sara Bowen, Ryan Uutela, Katie Uutela, Tyler Lamon, Connor Lamon, and Neil Lamon.

John is remembered by family and friends as a truly warm and thoughtful husband, father, grandfather, and community leader, with a kindness, gentleness, and work ethic that are echoed in his children and grandchildren. His big smile, his generosity, and his loyal friendship are an enduring part of all of those whom were fortunate to have known him. He was a perfect gentleman, an active part of perhaps "the greatest" American generation so far, and truly one of a kind. Our deepest sadness at his passing is a reflection of the deep love which he shared with us all.

A memorial celebration of John's life is scheduled for Friday, March 13, 2009 at 3:00 pm at St. Andrew's Presbyterian Church on Franklin Blvd. in Yuba City. Given John's love of Maui, the family recommends casual Hawaiian style attire for the service. In lieu of flowers, the family suggests that donations be made in John's honor to one of his favorite charities, such as the Marysville Rotary Club Foundation, the Fremont-Rideout Hospital Foundation, or the Boy Scouts of America.

John and Marlene in Maui 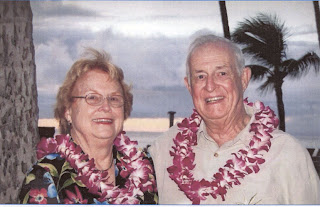 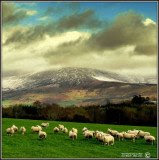 A Wish for a Friend

Wishing you a rainbow

For sunlight after showers-

Miles and miles of Irish smiles

Shamrocks at your doorway

For luck and laughter too,

And a host of friends that never ends

Each day your whole life through!

For every storm, a rainbow,

For every tear, a smile,

For every care, a promise,

And a blessing in each trial.

For every problem life sends,

For every sigh, a sweet song,

And an answer for each prayer.

Said during thunder and lightening...

O Lord, be between us and harm and protect us

from the harm of the world.

May the road rise up to meet you.

May the wind always be at your back.

May the sun shine warm upon your face,

and rains fall soft upon your fields.

And until we meet again,

May God hold you in the palm of his hand. 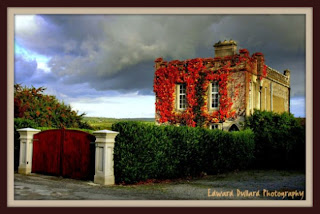 Make it safe by night and day.

Bless these walls so firm and stout,

Keeping want and trouble out.

Bless this roof and chimney tall,

Let thy peace lie over all.

Bless the doors that they may prove,

Ever open to joy and love.

Bless the hearth a-blazing there,

Bless the people here within...

Keep them pure and free from sin.

Bless us all, that one day, we

May be fit, O Lord, to dwell with Thee. 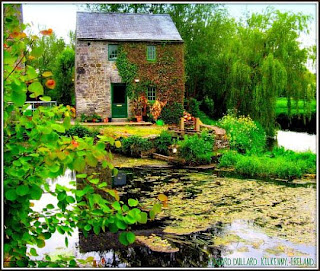 May love and laughter light your days,

and warm your heart and home.

May good and faithful friends

be yours, wherever you may roam.

May peace and plenty

bless your world with joy

May all life's passing seasons,

bring the best to you and yours! 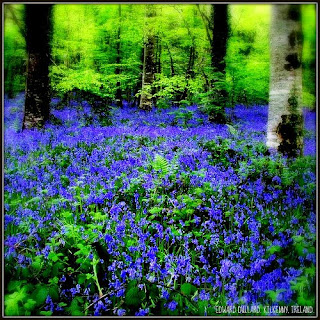 May the blessing of light be on you-

light without and light within.

May the blessed sunlight shine on you

and warm your heart till it glows 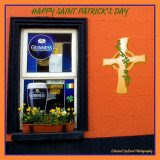 May neighbors respect you,

The angels protect you,

And heaven accept you.

Many thanks and blessings to Edward Dullard of Kilkeny, Ireland, for his kind permission to use these images. "May your day be touched by a bit of Irish luck, brightened by a song in your heart, and warmed by the smiles of the people you love."

Posted by Sylvia at 1:24 PM No comments: Links to this post 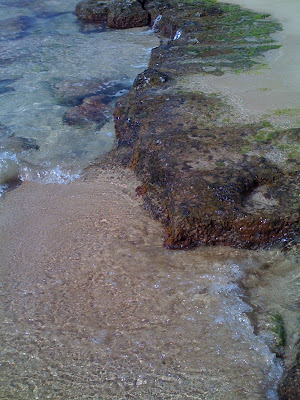 On Christ the solid rock I stand~

all other ground is sinking sand...

Posted by Sylvia at 4:06 PM No comments: Links to this post