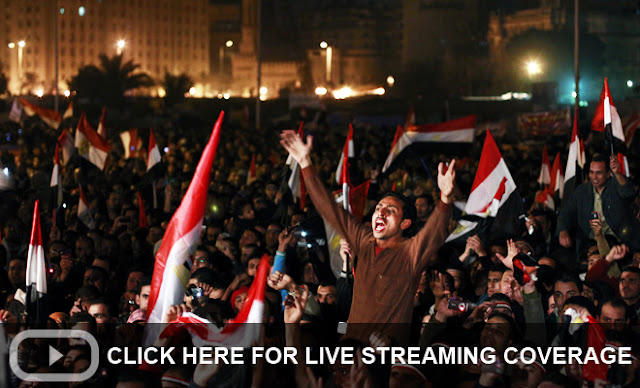 The huge crowd in Tahrir Square, Cairo, reacted in jubilation today to the stunning news that the dictatorship government of President Hosni Mubarak fell. The military council will be setting up a provisional government until political parties can be formed and elections held.

Mubarak's regime ruled for over 30 years. Eighteen days ago the people of Cairo began an uprising in Tahrir Square which played out on TV screens around the world, even when Mubarak shut down all internet and cell phone usage in Egypt.

The Egyptian people have earned the right to re-write their constitution and embrace democracy so that they can be free. Besides watching history unfold in the mid-east, I have a special interest in the political outcome in Egypt as I have a dear friend, Rawia, who lives and works in Cairo. My thoughts and prayers are with her and her family and friends on this historic day.
Posted by Sylvia at 10:15 AM No comments: Links to this post