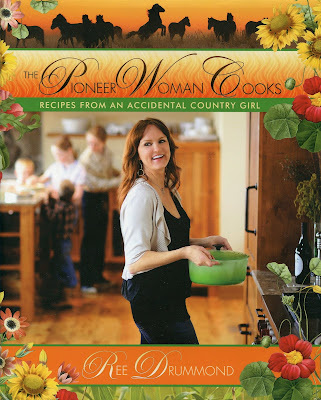 Three years ago our daughter, Olivia, found a very entertaining blog online about a young wife and mother who lives on a cattle ranch out in the middle of nowhere in this great big country of ours.

According to the back flap on her new cookbook just out, Ree began blogging in 2006 and built www.ThePioneerWoman.com into an award- winning website. She has won several national 2009 weblog awards: weblog of the year, best-designed weblog, and best photography of a weblog.

Ree shares recipes, with her signature photographs accompanying the directions, showcases her ranch photography, and writes hilarious chapters about how she met her "Marlboro Man," hubby Ladd. The name she has given this story, sure to become a future book, is "Black Heels to Tractor Wheels." It really is an amazing story...you've got to go on her site and read it!

Actually, after Liv got hooked on Pioneer Woman, she got my husband, David, hooked on it, and finally I gave up and succumbed to the fun.

What makes Ree's blog irresistable is the recipes, the photographs, the funny daily postings with Ree's gentle, self-deprecating humor, the colorful design of the site, the contests when she has 20,000 plus entrants in a day, the great prizes she gives away, the home schooling stories about her four children, and the adoring fans who check in daily and leave thousands of messages themselves. She has built up thousands and thousands of readers in her fan base.

Whew!! How she does it all, I can't imagine, no one can, but she has regular followers from all around the world, and now she has come out with a big-time selling cookbook!! Actually The Pioneer Woman Cooks, Recipes From an Accidental Country Girl debuted in the #1 spot for nonfiction hard back.

By now you are probably wondering what the tie in is for me. Yes, there is a personal story here which has now become part of our family lore... 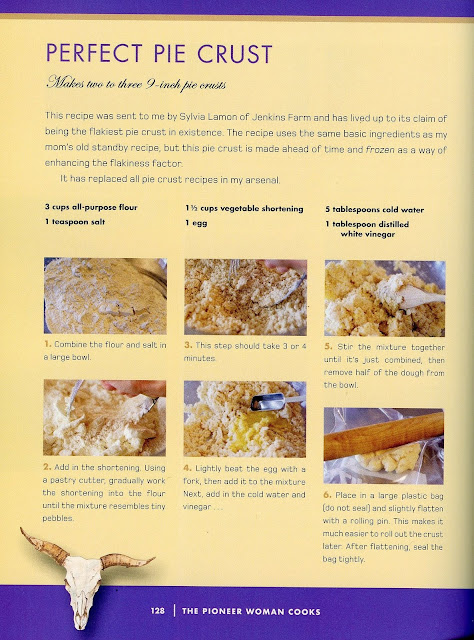 In December of 2007 I was reading Pioneer Woman one day and she mentioned that she was "going to do pies on the blog for Christmas."

My first thought was, "Oh my gosh, I hope she has a really good pie crust recipe or they won't turn out very well no matter what she does." (Have you ever eaten what could have been a really good piece of pie, except that the crust just wasn't very good?)

I don't know about you, but I'm getting to the age that something has to be really good, like a really good cookie, or a really good piece of pie, before I'll eat it.

I mean, who needs the calories of all the bad or mediocre stuff?

Anyway, I had a brilliant thought: "Why not send in my pie crust recipe to Ree? Whatever happens, happens." So I e-mailed it to her, and waited to see what happened.

By this time my family and I had traveled to Maui for Christmas. I was going on the Pioneer Woman site on the laptop each day to see what kind of pies she was going to showcase...then lo and behold, on her December 22, 2007 posting, there it was!!! Perfect Pie Crust, with the story about me sending it in, the photos and the recipe. I think I let out a shout that must have been heard all around the Pacific Ocean at the very least.

Please note: I did not make up the recipe, but I recognized it as being a great one about 35 years ago and adopted it as my own. I have seen it written up in the newspaper since as one of the premiere recipes used by some of the best chefs, so it truly is worth trying! A lot of people commented on Ree's site that it is the same recipe that their grandmother used, so it has been around for decades...the vinegar and egg combination may seem odd, but they produce an extremely flaky crust, especially after freezing, which allows you to make up your crusts ahead of time, which is what caught Ree's attention.

My family and friends had always loved my pie crust, but what a funny thing to become known for! Over the days and months ahead all manner of people from all over the planet were writing in their opinion of my recipe, most very positive thank goodness. I still remember the man from some foreign country (France?) who left a message whining because how could he possibly make my pie crust when they don't have Crisco in his country and he doesn't even know what it is?!?

Well, my family celebrated our 'sort of' new-found fame,' and from time to time I would check in to see what kind of comments readers were continuing to leave about my pie crust on Ree's site.  Then one day last winter, about a year ago, I received an out-of-the-blue email from Ree stating that she was writing a cookbook, the New York editors were making her turn it in that day, she was really in a hurry, and would I please give her permission to use my pie crust recipe? I said, "Yes, of course," and then she asked what name would I like on the page? I quickly decided Sylvia Lamon of Jenkins Farms, and that is how it turned out.

The Pioneer Woman Cooks was released in the fall, and I made up my Christmas list of close family and friends and ordered the books. What fun it was to receive them, sign and wrap them and give them as gifts! It really is a great cookbook- wonderful recipes and photography, and lots of family photos and information about living on their cattle ranch in Pawhuska, Oklahoma of all places. My nephew Jim's fiance, April, has already made a number of the recipes and loves them!! 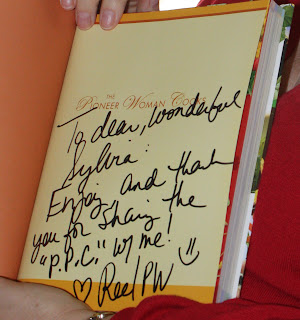 As a Christmas surprise for mom, my daughter sent a copy back to Ree and had her personally sign it for me and then presented it to me on Christmas morning. It will be a treasured keepsake! Ree wrote, "To dear, wonderful Sylvia: Enjoy and thank you for sharing the Perfect Pie Crust with me! Heart, Ree/PW" (Pioneer Woman).

Go on Ree's website and see what it's all about. Chances are you will love it!! Then buy the cookbook, and I guarantee at the very least that your pies will be fabulous. Here is a video of Ree ~
Posted by Sylvia at 5:54 PM 6 comments: Links to this post 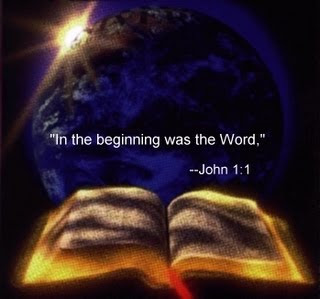 Recently, right before Christmas, I finished reading the entire Bible for the third time in the last three years. I would love to share with you how reading God's Word has changed my life.

I grew up in a Christian home, but one in which the Bible was not read. My mom had mentioned a few times in her life that she had read the entire Bible for a class in college, and she was proud of that achievement.

We did attend church most of the time, so I grew up with the foundation of Christian worship in my life, which was very important to me. During college years away from home, however, I drifted away from church as so many do.

Thankfully I married into a strong Christian family, and that is when my spiritual life began to change! My husband, David, was raised in another mainline church, but his family said grace before meals, prayed together and read the Bible. In addition, there was someone wonderful in the family who's faith made a very deep impression on me: Gram Lamon, the matriarch of the family. 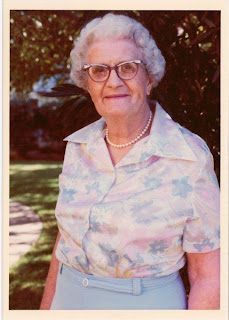 Gram had been raised in Alabama as a Southern Baptist, and Gram Lamon knew the Bible backwards and forwards, really the first person I knew well that did.  My grandparents had all passed away when I was young as my parents had married later in life, so I was thrilled to be getting a grandmother as an adult who I could really enjoy.

While I was learning all those things, and giving her her first great-grandchildren, I learned to love her quaint southern sayings like, "Oh, lawsie mercy!" One day I went to her apartment to visit, carrying a child on my hip, and when I went in I asked her what she had been doing. I saw her Bible open as usual on the little table next to her chair and she said, "Studying for my final exams." By this time Gram was in her 70's.

I decided to write a cookbook for the family, with all Gram's favorite recipes that we had all grown to love, and I put her favorite scripture passages in the book as well. All of this was having an impact on me as Gram showed me what a life of faith could be like.

By the time Gram passed away, she and her faith had made a life-long impression on me. Gram was beloved by so many people, and she was an awesome woman of God in her own quiet way. Gram died in her early 80's, having lived a full life: she raised three strapping sons, all pillars of the community, numerous grandchildren, and helped found a family construction company.

Years went by and my husband and I and our children faithfully attended church, with David and I each holding various volunteer and elected positions. We worshipped God and we loved God, but we still didn't know the Bible! How could people attend church for decades and not know the Bible, the very foundation of the church? 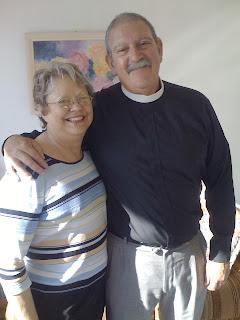 One day, however, our lives changed, because our church did a great thing...we called two pastors (married to each other), who really know and love the Bible. I thank God for Pastors Joy and Steve every day. Without them I would never have begun my journey reading and studying the Bible, the greatest book ever written in the history of mankind, about the greatest person who has ever lived and walked on earth, Jesus Christ.

With Joy and Steve's encouragement three dear friends from our congregation, Brad, Martha, Nancy, and I took instruction and were ordained deacons in the church on September 11, 2007.

Reading the Bible for a few minutes everyday helps us develop a deeper relationship with God. Think of the Bible as a lifeline, especially for you, from God in heaven!

John 3:16-17 For God so loved the world, that he gave his one and only Son, that whoever believes in Him shall not perish but have eternal life. For God did not send His Son into the world to condemn the world, but to save the world through Him.

Posted by Sylvia at 1:16 PM No comments: Links to this post